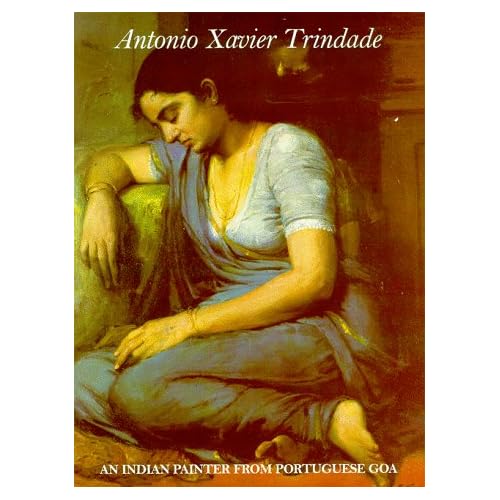 A guided visit of the exhibition “António Xavier Trindade – a painter from Goa (1870-1935)” was organized at the premises of Fundação Oriente at Fontainhas, Panjim. The visit was conducted by the Delegate of the Fundação Dr.Eduardo Kol de Carvalho on 2nd January 2013  and was  organized by IGSG – Indo German Friendship Society Goa in collaboration with Fundação Oriente, as well as Indo Portuguese Friendship Society Goa, LSG  – Lusophone Society of Goa, British Business Group Goa and Circolo Italiano Goa.

Since 24. November 2012 the Fundação Oriente located in Panjim, is holding the exhibition “António Xavier Trindade – a painter from Goa (1870-1935)”. The exhibit shows a set of 29 oil paintings, water colours and drawings belonging to a collection of 144 works. Known as the Rembrandt of the East,  António Xavier Trindade is considered one of the five most important artists of India of his time. The painter’s work is paradigmatic of the crossing of Eastern and Western cultures and Trindade was regarded as one of Bombay’s leading realist painters at the turn of the century. Sanguem-born Trindade was professor at Mumbai’s  JJ School of Art. In this page you can see some pictures of the guided visit.